New Orleans is known as the birthplace of jazz, famous for its cuisine and festivals, especially the annual Mardi Gras. For two weeks during the month of February or March, New Orleans city streets are filled with music, dancing and colourful floats incorporated in the annual Mardi Gras parade. Participants and party goers don-on elaborate costumes for the huge party on Mardi Gras day, known in New Orleans as Fat Tuesday.  All year round, Bourbon Street is the hub of the buzzing French Quarter, where locals and tourists flock for the best live music and largest cocktails.

It’s hard to believe that most of the area that is now called New Orleans was originally uninhabitable bog. Along the bend of the Mississippi River was the only viable land on which to build. This crescent-shaped land is located in the old-part of town (French Quarter, CBD, Bywater, Warehouse District and Faubourg Marigny) hence, its nickname ‘The Crescent City’.

In 2019, the Best Picture Oscar Award was won by American comedy-drama movie, Green Book which was partially filmed in New Orleans. Throughout the movie, you get a glimpse of the ‘Tiny Houses of the South.’ The road-trip style movie is set in 1962, and filmed in a variety of places from New York City to New Orleans. For those interested in a self-guided tour of the Green Book film locations, see the notes at the bottom of this article.

For other New Orleans filming locations, check out Louisiana Travel website which is packed with trip ideas, tours and awesome things to do in New Orleans.

New Orleans has over 300 years of historic architecture which includes shotgun house design. It has a diverse architectural style that is distinctly colonial French and Spanish.

Small and modest Shotgun houses are unique in many New Orleans neighbourhoods from as early as 1810 in the French Quarter and Treme. After reading an article on a New Orleans Shotgun House Tour, I caught a pedestrian ferry from Canal Street across the muddy Mississippi river to the second oldest neighbourhood Algiers.  Algiers is architecturally rich and the perfect destination to admire and photograph the Best Shotgun ‘compact living’ treasures.

Many shotgun houses have been beautifully rejuvenated throughout the city like this one in Pelican Street, Algiers.  The unique style of Shotgun house architecture is integral in the New Orleans footprint. Shotgun houses for sale around New Orleans have increased dramatically over the last decade and attract record resale prices.  Just take a look on Zillow.com  and Realtor.com at historical real estate prices in New Orleans.

When visiting a new city, I like to explore places not on the tourist map to get a feel for what it would be like to live there. With the help of Google Maps it  was ease to find each Shotgun house in the Algiers neighbourhood. The flat streets may be shady and beautiful, however many of roads and footpaths are in disrepair. I felt very safe walking the streets and enjoyed chatting with residents who were more than happy to talk about their neighbourhood and the Shotgun house architecture in Algiers.

Compact living has become increasingly popular around the world with television programmes showcasing the cost-saving benefits, design ideas and alternative solutions of small scale living. Cleverly designed small house plans focus on creating efficient use of space whilst making the home appear larger than it is. Good use of outdoor areas are often incorporated in tiny homes. Many first time house buyers looking for more affordable builds are turning to tiny houses rather than traditional project homes.

After your self-guided shotgun house tour, don’t miss a stop off at Old Point Bar on Patterson Street which is filled with loads of character, cheerful locals and ice cold beer.

Why Is It Called a Shotgun House?

The name “shotgun” may have been derived from the idea that a bullet could be fired through the front door and out the rear without touching a wall. There are many theories, but one such theory is that the narrow design was in response to a real estate tax based on frontage rather than square footage. However, that theory is difficult to validate as no one can find that tax code in the history books!

No matter its origin, these simple in design and easy to build houses dominated the late 19th and early 20th century of New Orleans working-class neighbourhoods and some wealthier areas such as the Garden District.

A single Shotgun house is the simplest style house consisting of a long narrow structure, one wide and 3 to 5 rooms deep. Usually, Shotgun House dimensions are no more than 12 feet / 3.5M wide. Each room opens onto the next. Externally, the typical house consists of a single façade, gable, hip or apron roof, porch, front and back door, window with shutter.

The double Shotgun is a duplex / twin of the single Shotgun; two separate residences under one roof. The double has a symmetrical façade with a central pair of shuttered windows flanked by entrance doors. Both residences have a similar layout as the Single Shotgun however neither have an interior hallway. 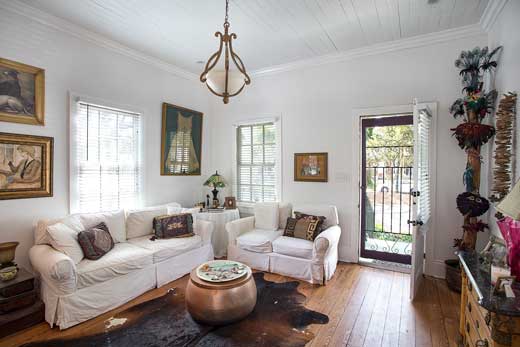 Photographs below by Progressive Traveller

CBS News proclaimed Louisiana the “movie capital of the world,” because Hollywood loves shotting feature films and television shows in New Orleans. The film locations are easy to visit and an interesting way to see different parts of this great city.

The 2018 award-winning American comedy-drama movie Green Book was partially filmed in New Orleans.  The road-trip style movie set in 1962 was filmed in a variety of places from New York City to New Orleans. Rotten Tomatoes, an American review website for film and television gives Green Book an overall score of 81%. Personally, I loved the film and enjoyed the road-trip from Manhattan to the Deep South.

2. A New York City street was created at the intersections of East Thomas and South Cypress Street in Downtown Hammond.

3. A painting studio, Painting with a Twist in Hammond, was transformed into an old-fashioned store selling Christmas ornaments, toys and electronics. The large storefront window and studio received a major makeover for the shooting.

4. The unfriendly bar scene was filmed at Benny’s Place on West Thomas Street in Hammond

5.  The hot-dog-eating contest took place at The Clover Grill on Bourbon Street

When Tony Lip (Mortensen), a bouncer from an Italian-American neighborhood in the Bronx, is hired to drive Dr. Don Shirley (Ali), a world-class Black pianist, on a concert tour from Manhattan to the Deep South, they must rely on “The Green Book” to guide them to the few establishments that were then safe for African-Americans. Confronted with racism, danger—as well as unexpected humanity and humor—they are forced to set aside differences to survive and thrive on the journey of a lifetime.

“See any detour as an opportunity

Want More Blogs On the USA?

The Five Missions of San Antonio

Things to Do in Nashville

On your trip you’ll meet two kinds of travellers – those who pack light and those who wish they had! This is my personal packing list that I've created based on years of travelling and you can get it for FREE
This website uses cookies to ensure you get the best experience. If you do not consent to our collection and storage of data, you may choose not to continue your site visit. Accept Reject Read More
Privacy & Cookies Policy